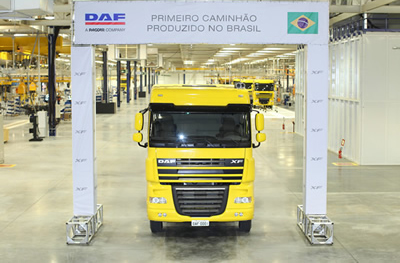 The First DAF Truck Manufactured in the Brasil Assembly Facility

Financial Highlights Third Quarter 2013
Highlights of PACCAR's financial results during the third quarter of 2013 include:

Financial Highlights Nine Months 2013
Highlights of PACCAR's financial results during the first nine months of 2013 include:

Global Truck Markets
DAF's premium-quality vehicles have achieved industry leadership in Europe.  "DAF is the European leader in on-highway tractors; and has achieved an overall market share of 15.9 percent in the above 16-tonne segment this year," said Harrie Schippers, DAF president.  "Customers recognize DAF's product quality leadership, low operating costs and excellent resale value.  DAF's range of industry-leading vehicles has been enhanced by the launch of the new DAF XF, CF and LF Euro 6 vehicles.  The 2013 industry registrations in the above 16-tonne truck market in Europe are estimated to be 215,000-225,000 units.  DAF truck orders increased by 70 percent during the third quarter compared to a year ago as customers purchased Euro 5 trucks before the introduction of higher cost vehicles resulting from Euro 6 environmental regulations effective in 2014.  DAF deliveries in the fourth quarter will benefit from the pre-buy.  It is estimated that European truck industry registrations in 2014 will be in the range of 200,000-230,000 units," added Schippers.

"Class 8 industry retail sales in the U.S. and Canada are expected to be in the range of  205,000-215,000 vehicles in 2013," said Dan Sobic, PACCAR executive vice president.  "Truck demand is being driven primarily by the ongoing replacement of the aging truck population and an improving housing sector.  Estimates for U.S. and Canada truck industry Class 8 retail sales in 2014 are in the range of 210,000-240,000 units, driven by ongoing fleet replacement and some expansion of industry fleet capacity reflecting modest overall economic growth," added Sobic.

South American Growth
PACCAR began production of DAF trucks at its new assembly plant in Ponta Grossa, Brasil, in October 2013.  "The new 300,000-square-foot assembly facility, located on 569 acres, is a high-technology, environmentally friendly plant designed to assemble the premium-quality DAF XF, CF and LF vehicles.  The factory will build DAF trucks for Brasil and the South American market.  Our DAF dealers have invested in the newest and most modern distribution network in the country to support our customers," said Bob Christensen, PACCAR executive vice president and chief financial officer.  "The above six-tonne truck market in Brasil is projected to be over 145,000 units in 2013, with steady growth expected in future years.  The largest and fastest growing segment of the Brazilian truck market is the premium segment where DAF has launched its flagship model XF-105 vehicle." 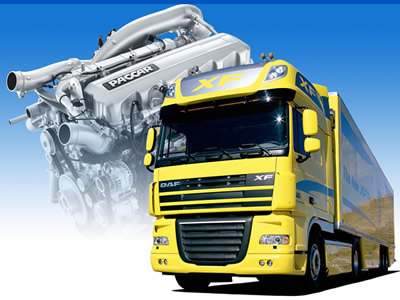 Capital Investments and Product Development
PACCAR's excellent long-term profits, strong balance sheet, and intense focus on quality, technology and productivity have enabled the company to invest $5.6 billion in capital projects, innovative products and new technologies during the past decade.  "In 2013, capital of $425-$475 million and R&D expenses of $250-$260 million are being invested in new products and increased manufacturing capacity," said George West, PACCAR vice president.  "Next year, capital expenditures for product development and enhanced operating efficiency are projected to be $350-$400 million.  Research and development expenses are estimated at $225-$275 million in 2014 as Kenworth, Peterbilt and DAF invest in industry-leading products and services to enable our customers to continue to deliver profitable results in their businesses."

"Kenworth, Peterbilt and DAF have launched new families of high-quality, fuel-efficient vehicles.  PACCAR's range of engines has also been expanded with the introduction of the 2013 PACCAR MX-13 and the PACCAR MX-11 engines," said Ron Armstrong, PACCAR president.  The Kenworth T880 and the Peterbilt Model 567 trucks designed for the vocational market will be in production in November 2013. 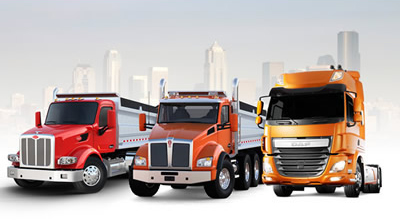 Financial Services Companies Achieve Record Results
PACCAR Financial Services (PFS) has a portfolio of over 158,000 trucks and trailers, with total assets of $11.37 billion.  PacLease, a major full-service truck leasing company in North America and Europe, with a fleet of over 34,000 vehicles, is included in this segment.  "During the third quarter and first nine months of 2013, PFS profit increased due to growth in its portfolio," said Bob Bengston, PACCAR vice president.

PACCAR is a global technology leader in the design, manufacture and customer support of high-quality light-, medium- and heavy-duty trucks under the Kenworth, Peterbilt and DAF nameplates.  PACCAR also designs and manufactures advanced diesel engines and provides financial services and information technology and distributes truck parts related to its principal business.

PACCAR will hold a conference call with securities analysts to discuss third quarter earnings on October 29, 2013, at 9:00 a.m. Pacific time.  Interested parties may listen to the call by selecting "Earnings Webcast" at PACCAR's homepage.  The Webcast will be available on a recorded basis through November 6, 2013.  PACCAR shares are listed on the NASDAQ Global Select Market, symbol PCAR, and its homepage can be found at www.paccar.com.