July 22, 2008, Bellevue, Washington "PACCAR reported very good revenues and net income for the second quarter of 2008," said Mark C. Pigott, chairman and chief executive officer.  "PACCAR benefited from balanced global diversification, with over 65 percent of revenues originating outside the U.S. and continued solid performance from the companys aftermarket parts and financial services businesses.  Robust demand for PACCAR products in Europe and international markets continues to generate excellent earnings and provide opportunities for growth, tempered by the continued softness in the U.S. and Canadian truck markets."

"PACCARs strong balance sheet and outstanding cash flow have allowed the company to increase its capital investments in high-quality new products and services, enhance facility efficiency and increase aftermarket distribution capacity during all phases of the business cycle," noted Pigott.  Capital expenditures and research and development expenses increased to a total of $205 million during the second quarter.

Stock Repurchase Update
PACCAR is nearing completion of its previously announced $300 million share repurchase program.  During the second quarter of 2008, PACCAR repurchased 1.89 million of its common shares for $89.8 million.  PACCAR has repurchased a total of 5.62 million shares for $262.5 million under this $300 million repurchase authorization.  Earlier this month, the PACCAR Board of Directors approved the repurchase of an additional $300 million of its outstanding common stock.  "PACCARs strong net profits and excellent cash flow make the companys shares an attractive long-term investment," said Mike Tembreull, PACCAR vice chairman.  "The stock repurchase program reflects the Boards confidence in PACCARs successful global business growth." PACCAR has earned a net profit for 69 consecutive years and has paid a dividend every year since 1941.  The companys stock, including reinvested dividends, has outperformed the S&P 500 Index for the previous three-, five- and ten-year time periods.

Financial Highlights Second Quarter 2008
Highlights of PACCARs financial results during the second quarter of 2008 include:

Financial Highlights First Half 2008
Financial highlights for the first six months of 2008 include:

Capital Investment Program Update
In May, the steel structure for PACCARs $400 million engine manufacturing and assembly facility in Columbus, Mississippi was completed.  "Construction of the world-class, high-technology engine facility is on schedule and is due to be completed in late 2009," said Jim Cardillo, PACCAR executive vice president.  The facility will complement the companys engine factory in the Netherlands and expand the manufacture of PACCAR 12.9L and 9.2L engines for use in Kenworth, Peterbilt and DAF vehicles.

Kenworth CleanPower and Peterbilt Comfort Class vehicles are setting the environmental standard for the industry.  "These factory-installed no-idle climate control systems provide heating and cooling, plus 110-volt hotel power load solutions without the need to operate the engine, thereby reducing emissions by 12 percent and improving fuel economy by up to 8 percent," said Tom Plimpton, PACCAR president.

In early September, PACCAR will begin production of innovative medium-duty Kenworth and Peterbilt diesel-electric hybrid vehicles.  The diesel-hybrid technology reduces emissions and targets fuel efficiency improvements of up to 30 percent for urban applications.

Growth in Asian Markets
PACCAR has sold transportation equipment in Asia for 100 years.  The development of highway systems in China and India will increase intra-country commerce, resulting in demand for reliable, high-quality commercial vehicles.  "Following the opening of a new office in Shanghai, China in 2007, PACCAR plans to open an information technology, engineering and purchasing office in Pune, India in 2008," said Tom Plimpton, president.  "The Pune office will enable PACCAR to increase its participation in this exciting and important market."

Leyland Trucks Celebrates Ten Years as a PACCAR Company
Leyland Trucks recently celebrated ten years as a strategic member of the PACCAR family of companies.  Leyland manufactures DAF LF, CF and XF vehicles for customers in Europe, Australia, Africa and North America at its world-class 710,000-square-foot facility in Lancashire, England.
Highlights from the past decade include:

"Leyland Trucks operates one of the most efficient and advanced commercial vehicle factories in the world," said Jim Sumner, Leyland managing director.  "The success of Leyland is a result of the skill and dedication of our employees, dealers and suppliers and has been an important contributing factor in the impressive growth of DAF Trucks."

"The dramatic increase in diesel prices, coupled with declining housing starts and auto production, impacted U.S. and Canadian Class 8 truck sales in the first half," said Dan Sobic, PACCAR senior vice president.  Industry retail sales for 2008 are expected to be in the range of 150,000-165,000 vehicles.  Kenworth and Peterbilt continue to achieve a strong share of industry orders due to their superior quality, reliability and industry-leading resale value.

Financial Services Companies Achieve Strong Revenues
PACCAR Financial Services (PFS) has a portfolio of 169,000 trucks and trailers, with total assets of $11.1 billion.  PACCAR Leasing, a major full-service truck leasing company in North America with a fleet of over 32,000 vehicles, is included in this segment.  Second quarter pretax income of $58.7 million compares to the $68.9 million earned in the second quarter of 2007.  Second quarter revenues were $330.5 million compared to $286.8 million in the same quarter of 2007.  For the six-month period, pretax income was $126.0 compared to $134.5 in 2007.  First-half revenues increased to $647.9 from $550.8 million for the same period a year ago.  Finance margins improved due to portfolio growth, but profit was reduced due to an increase in the provision for credit losses due to higher repossessions in the U.S. and Canada.  Credit losses increased in the second quarter of 2008 to $23.0 million versus $15.3 million in the first quarter of 2008.

PACCAR will hold a conference call with securities analysts to discuss second quarter earnings on July 22, 2008, at 9:00 a.m. Pacific time.  Interested parties may listen to the call by selecting "Live Webcast" at PACCARs homepage.  The Webcast will be available on a recorded basis through August 1, 2008.  PACCAR shares are listed on NASDAQ Global Select Market, symbol PCAR, and its homepage can be found at www.paccar.com. 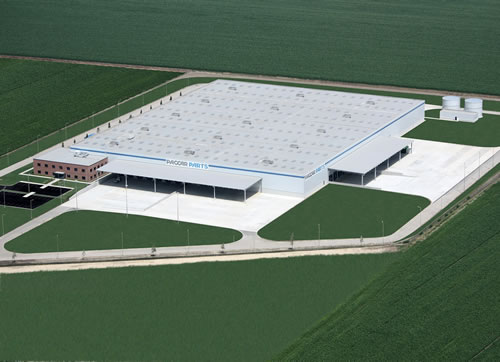