Global Technology Leader
In a White House ceremony on February 13, 2006 President George W. Bush presented PACCAR with the National Medal of Technology, the nations highest award for innovation.  PACCAR earned the award for its decades of industry leadership in developing aerodynamic, lightweight commercial vehicles which have dramatically reduced fuel consumption, increased the productivity of freight transportation and contributed to the strength of the nation's economy.

PACCARs technology leadership is a result of the innovation and creativity of our 22,000 employees, said Pigott.  Innovation is one of the companys defining characteristics and enables PACCAR to be a leader in every field in which it competes. PACCAR recently announced a number of exciting new initiatives which will continue to enhance the exceptional value delivered to its customers:

PACCARs global operating divisions sell into 100 countries and the companys products have earned a reputation for durability and excellent life-cycle costs.  PACCARs revenues from outside the United States during the first quarter were 49 percent of total revenues.

Revenues at PACCAR Parts, the companys aftermarket parts division, continued to increase in the first quarter as more dealers and customers use the companys proprietary inventory management software systems.  PACCARs aftermarket parts revenues were $1.7 billion in 2005 and the compound annual growth rate (CAGR) in parts sales has been nearly 14 percent over the past decade.

Share Repurchase
During the first quarter of 2006, PACCAR repurchased 2.5 million of its common shares ($175 million invested) under a five million share program announced on October 25, 2005.  The share repurchase programs reinforce the fact that PACCAR is an excellent long-term investment.  The companys goal is that its market valuation ratios be equal to other premier global industrial companies, noted Tembreull.  PACCAR has returned over $1.4 billion to shareholders through dividends and share repurchases during the past 15 months.

Industrial Ranking Increases Significantly
In its April 17, 2006 edition, Fortune magazine ranked PACCAR as the 157th largest company in the Fortune 500 based on revenue during 2005, up from 188th place in 2004.  PACCAR was one of the leading companies for return on revenue of the 28 OEM companies included in the motor vehicle and parts sector.  Over the last ten years, PACCAR has ranked in the top 20 percent for average annual EPS growth and the top 5 percent in total return to investors for all companies in the Fortune 500.

Capital Investment Increases Companywide
PACCAR is earning record income due to the benefits of ongoing capital investments throughout the company, said Tom Plimpton, president.  In order to further enhance its industry leadership, PACCAR will increase capital and expense investment by constructing new facilities, accelerating product development, and growing financial services and technology platforms.  Examples of these investments are a new engine test center in Europe, 20 percent increase in Kenworth manufacturing capacity, new parts distribution centers, new aerodynamic and hybrid vehicles, PACCAR Leasing expansion, and new finance and manufacturing information systems.  The cost of these exciting projects will increase research and development expenses, but will position the company for even stronger growth in the future.

Strong Growth of Global Commercial Vehicle Markets
The global commercial vehicle industry is a growth business which continues to benefit from strong demand, stated Jim Cardillo, senior vice president.  Freight activity is robust and trucking company profits are at record levels, added Cardillo.  U.S. and Canadian Class 8 industry truck retail sales are projected to be 290,000-310,000 units during 2006, an increase of approximately 5 percent over 2005 levels.  The Class 6-7 industry truck market in the U.S. and Canada for 2006 is expected to increase slightly to 100,000-110,000 units.

Over the last several years, the Western European truck market has increased faster than Euro-zone GDP due to a growing transport sector and an expanding European economic trading block, commented Aad Goudriaan, DAF Trucks president.  For 2006, Western European industry truck deliveries above 15 tonnes are forecast to be 245,000-265,000 vehicles, approximately equal to last year.  DAF Trucks has increased its market share in each of the past six years, with an above 15 tonne market share at a record 13.7 percent in 2005.  The industry 6-15 tonne truck market in 2006 should be approximately 75,000-80,000 units.

Financial Services Achieves Excellent Quarterly Earnings
PACCARs financial services segment is comprised of a portfolio of over 145,000 trucks and trailers, with total assets in excess of $8.6 billion.  Included in this segment is PACCAR Leasing, a major full-service truck leasing company in North America, with a portfolio of more than 23,000 vehicles.

As a growing part of the PFS group of companies, PACCAR Leasing (PacLease) is generating excellent results as the primary leasing company in the markets which specify Kenworth and Peterbilt products, added Bob Southern, PacLease president.  The PacLease network has grown to 247 franchised and company-owned locations in Canada, the United States and Mexico.

PACCAR is a $14 billion global technology leader in the design, manufacture and customer support of high-quality light-, medium- and heavy-duty trucks under the Kenworth, Peterbilt and DAF nameplates.  It also provides financial services and information technology and distributes truck parts related to its principal business.

PACCAR will hold a conference call with securities analysts to discuss first quarter 2006 earnings on April 25, 2006, at 8:00 a.m. Pacific time.  Interested parties may listen to the call by selecting Live Webcast at PACCARs homepage.  The Webcast will be available on a recorded basis through May 2, 2006.  PACCAR shares are traded on the Nasdaq Stock Market, symbol PCAR, and its homepage can be found at www.paccar.com. 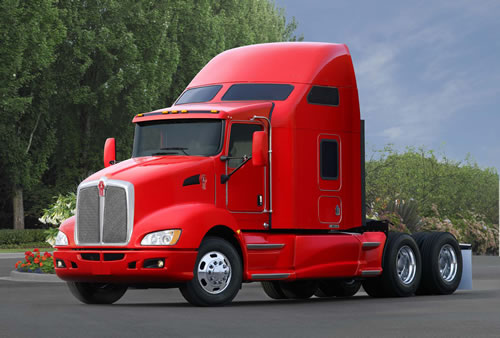 The new Kenworth T660 is the latest evolution of Kenworths aerodynamic product line.